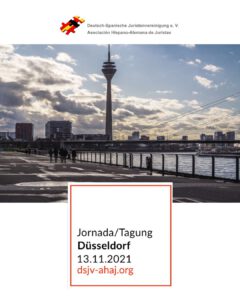 On 13 November 2021, the German-Spanish Lawyers Association (Deutsch-Spanische Juristenvereinigung e.V.) held a symposium on the topic of M&A/ company acquisitions in Spain and Germany.

The well-attended event with around 70 participants had to be repeatedly postponed due to the Corona pandemic, and could now finally take place in beautiful Düsseldorf.

It became clear that the M&A sector in both countries has many similarities, as these transactions are traditionally driven by Anglo-Saxon structures and topics such as due diligence procedures and the cooperation of lawyers, financial and tax experts follow proven patterns.

On the other hand, it became apparent that company acquisitions out of insolvency in Spain and Germany and also tax issues in the context of M&A transactions show significant differences.

The same applies to the so-called MAC clauses, which come into play in disruptive events such as the current pandemic. There is a lack of uniformity here in both countries Germany and Spain, as supreme court decisions of a signal nature have been largely absent to date.

Incidentally, statistics on the number and volume of M&A transactions prove that the Corona pandemic has not significantly affected the M&A market in Germany and Spain.

On the contrary, the years 2020 and 2021 have seen a real boom in M&A transactions in Spain and Germany.

It is likely that the fact that there is currently a lot of liquidity in the capital markets and that institutional investors in particular are under pressure to invest their funds in assets plays a major role here.

In Spain, as a ‚target area‘, US and British companies are traditionally very active M&A investors, followed by investors from France, Germany and Luxembourg.